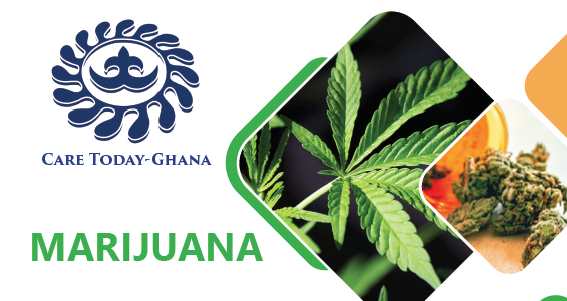 Marijuana is a mixture of the dried and shredded leaves, stems, seeds, and flowers of the cannabis sativa plant. The mixture can be green, brown, or gray. . Marijuana has a chemical in it called delta-9-tetrahydrocannabinol, better known as THC.

A lot of other chemicals are found in marijuana, too—about 400 of them, many of which could affect on your health. But THC is the main psychoactive ingredient. THC is up to no good in the brain. THC finds brain cells, or neurons, with specific kinds of receptors called cannabinoid receptors, to which it binds. Certain parts of the brain have high concentrations of cannabinoid receptors. These areas are the hippocampus, the cerebellum, the basal ganglia, and the cerebral cortex.

The functions that these brain areas control are the ones most affected by marijuana. Within a few minutes after inhaling marijuana smoke, an individual’s heart begins beating more rapidly, the bronchial passages relax and become enlarged, and blood vessels in the eyes expand, making the eyes look red. The heart rate, normally 70 to 80 beats per minute, may increase by 20 to 50 beats per minute or, in some cases, even double. This effect can be greater if other drugs are taken with marijuana.

Some Ghanaians may perceive the calling on government by certain groups for the legalization of marijuana to mean that this drug is not harmful or addictive. However, as stated earlier, marijuana can lead to addiction. Marijuana can also lead to short-term and long-term mental and physical health problems for users, including impaired memory and attention, anxiety, impaired coordination, learning problems, sleep problems, risk of bronchitis, and risk of other drug and alcohol disorders.

Under the influence of marijuana, you could fail to remember things you just learned, watch your grade point average drop.

The short-term effects of marijuana include:

Marijuana is a psychoactive drug that alters perception. Marijuana contains tetrhydrocannabinol (THC) which is chemical compound that causes the drug effects. The effect of Marijuana may be different for everyone and depend on how it is consumed. Smoking Marijuana produces a faster, shorter-lived high than taken it orally. The effects of dabs can be immediate and last for hours due to the concentrated amount of THC.

So legalization doesn’t change the underlying chemistry of marijuana and the very real addictions the drug can cause. Legalization also can’t stop the cycle of addiction. proponents of marijuana perpetuate the notion that marijuana is harmless, and that’s a message picked up by the mainstream press.

Users may think their families just don’t understand the benefits of marijuana, and they may feel validated by the legalization effort. Unfortunately for teenagers, marijuana use can have much more long-term effects. The teenage brain is not yet fully mature, with neurodevelopment continuing until at least the early or mid-20s.

During adolescence the brain is particularly sensitive to drug exposure, and marijuana use impacts how connections are formed within the brain.

Studies have shown that the use of marijuana is associated with reduced cognitive function in teens. One study found that teens who regularly use marijuana lose an average of 5.8 IQ points by the time they reach adulthood.

A recent study found that marijuana has a more negative impact on a teenager’s cognitive development than alcohol. Adolescents typically do not think using marijuana is as risky as using other substances. This belief has been steadily growing. Other long-term risks associated with marijuana use include respiratory issues, increased chance of lung cancer and heart attack, problems with child development during and after pregnancy.

Marijuana use in adolescence could have implications for academic functioning, as well as social and occupational functioning extending into later life. We found that marijuana users demonstrated slower processing speed, poorer verbal learning and memory, and sequencing abilities. Starting to use marijuana at a younger age can lead to a greater risk of developing a substance use disorder later in life.