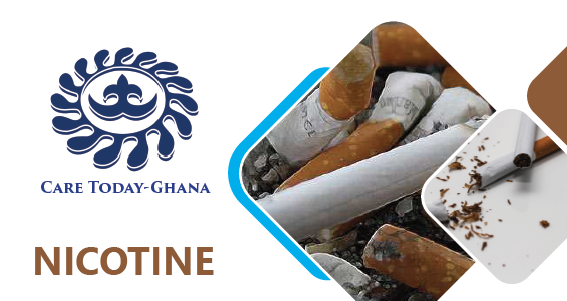 Nicotine is the drug in tobacco leaves. Nicotine is what keeps people smoking despite its harmful effects. A drop of pure nicotine would kill a person-in fact, nicotine can be used as a pesticide on crops. With each puff of a cigarette, a smoker pulls nicotine into his or her lungs where it is absorbed into the blood. In eight seconds, nicotine is in the brain, changing the way the brain works. This process happens so fast because nicotine is shaped like the natural brain chemical acetylcholine.

In 40 minutes, half the effects of nicotine are gone. So smokers get the urge to light up for another dose of the drug. After repeated doses of nicotine, the brain changes to adjust to too much dopamine, the brain cuts production of the neurotransmitter and reduces the number of some receptors.

Now, the smoker needs nicotine just to create normal levels of dopamine in his or her brain. Without nicotine, the smoker feels irritable and depressed.

Nicotine raises the heart rate and respiration (breathing) rate, and causes more glucose, or blood sugar, to be released into the blood. This might be why smokers feel more alert after smoking a cigarette. Tobacco smoke contains more than 4,000 chemicals. Besides nicotine, the most dangerous chemicals in cigarette smoke are tar and carbon monoxide.

Tar causes lung cancer, emphysema, and bronchial diseases. Smokers also have a dulled sense of smell and taste, reduced stamina for exercise and sports, and they smell of smoke.

Nicotine is an addictive substance (That is why you will see a mad man who has forgotten where he comes from, where his family is, and has forgotten he has not taken his bath for several months but will remember how to light a cigarette and smoke).

Parents naturally worry about the health and safety of their children. Every year, teens continue to light up even though there is strong public awareness about the health hazards of smoking. When you’re young, it’s hard to think about the consequences of your actions. Kids don’t project that smoking today can lead to negative effects in their future.

Many kids think they’ll just try one cigarette or two or three. These young smokers believe that they’ll be able to control their habit over time. Young people may experiment with cigars and chewing tobacco, which are also dangerous. Others try shisha, thinking they are a safe alternative to cigarettes.

Nicotine is a powerful addictive drug found in cigarette. Nicotine is the drug in tobacco leaves. Nicotine is what keeps people smoking despite its harmful effects. When you smoke, nicotine goes straight to your brain. Your brain has a circuits that release a chemical called dopamine which controls feelings of pleasure in the brain.

Nicotine spikes an increase in dopamine. when a teen smoke, nicotine goes quickly to the brain. In just 10 seconds, the pleasurable effects of the nicotine reach its peak levels. Within a few minutes, the pleasure is gone and the craving for another cigarette begins a new cycle.

That is how you get addicted to it. Nicotine addiction is a disease, but its preventable. Not trying the smoke is the best prevention because when you start, you will not be able to stop.

(That is why you will see a mad man who has forgotten where he comes from, where his family is, and has forgotten he has not taken his bath for several months but will remember how to light a cigarette and smoke).