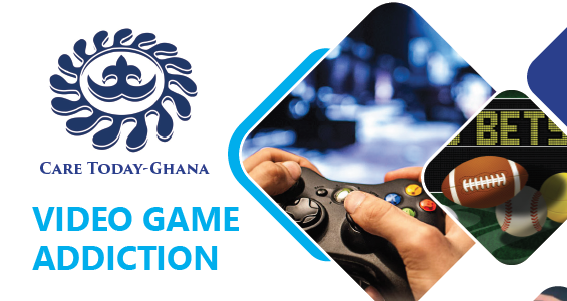 Video game addiction, also known as gaming disorder or internet gaming disorder, is generally defined as the problematic, compulsive use of video games that results in significant impairment to an individual’s ability to function in various life domains over a prolonged period of time. video games affect the brain in the same way as addictive drugs: they trigger the release of dopamine, a chemical which reinforces behavior. For this reason, playing video games can be an addictive stimulus.

Video game addictions are similar to other addictions in terms of the amount of time spent playing, the strong emotional attachment to the activity, and the patterns of social difficulties experienced by gaming addicts. As with other addictions, gaming addicts become preoccupied with game-playing, and it disrupts family and other areas of life, such as school. The younger that children begin playing video games, the more likely they are to develop dependence-like behaviors.

As with other addictive behaviors, there is a range of different responses to the activity. While some gamers feel unable to reduce the time they spend playing, others do not experience cravings if they are unable to play. Addiction to video games is a risk for children of all ages. Video game addiction is likely to negatively impact a child’s success in school.

A child who plays video games obsessively will probably fail to study, finish homework, or participate in sports or school clubs.

They may also be tired at school and fall asleep in class. Studies have shown that playing video games excessively can negatively affect a child’s emotional development as well as their academic success. Children who have a video game addiction may be more inclined to exhibit aggressive and anti-social behavior, and they might fail to develop mature social skills. Children’s minds are especially vulnerable to forming habits and routines.

When someone “needs” to play video games to be happy and feels miserable when they’re not playing, this suggests that they might have a disorder which is just as real as alcoholism or dependence on addictive drugs.

Gaming disorder is defined … as a pattern of gaming behavior (“digital-gaming” or “video-gaming”) characterized by impaired control over gaming, increasing priority given to gaming over other activities to the extent that gaming takes precedence over other interests and daily activities, and continuation or escalation of gaming despite the occurrence of negative consequences. A video game should not be the center of anyone’s life, but if it is, there is hope for getting unshackled from the screen. There is evidence that children who start to play video games at younger ages are more likely to develop video game addictions than children who start to play them when they’re older. Nevertheless, As a Parents you should make sure that your children have a balanced relationship with any video game that they play.

By contrast, a person might have an addiction to a video game if they can’t stop playing it, even though they know they should. They’re aware that the video game is causing them to neglect their family, friends, work, and education, but they keep playing anyway because they feel best behind the screen. For many people with a video game addiction, playing the game is not just “for fun.” It is their social life and a pillar of their self-esteem. Video games which exist on social media closely coincide with social media addiction, another behavioral disorder which thrives on the feeling of being accepted.

If you suspect that your child suffers from an addictive gaming disorder, there are some important signs to watch out and consider.

People who are addicted to video games also have increased emotional difficulties, including increased depression and anxiety, report feeling more socially isolated, and are more likely to have problems with internet pornography use.